Much, if not all, of  work performed by mothers, in relation to caring for children and home-duties, is unpaid work.  In a world where money = status, bearing and caring for children is at the bottom of the pile.   I believe in the value of Motherhood as a chosen occupation or otherwise; however today’s society doesn’t.

Fifty odd years ago, although not idealistic for women, was a time when mothering was valued; it was important.   I’m under no illusions of the difficulties women faced in the 1950’s.  Just read the list in the 1954 Home Economics High School Text Book titled, How to Be a Good Wife. Today, this list may seem unachievable and downright degrading; however, when read in context with the expectation of the time, it doesn’t seem so shocking; kidna nice actually. In saying that, I wouldn’t like to go back to that time period. Instead, I’m highlighting the high value society (1950) placed on homemaking and the power a woman has to create atmosphere for her family; so much so, it was taught in school. Wouldn’t it be nice to have the same value for mothers without the expectation; to have a variety of choice without the pressure? Wouldn’t it be nice to have the best of both worlds?

It’s 2010, not the 1950’s. Roles of women and men are intermixed. Our world is fast paced and ridiculously full of stuff.  Material things are made to break, not last. We replace everything and throw out everything else.  We feel embarrassed when we say, “I’m a Mum.”  For a better response we say, “I’m a Mum but I used to be a nurse,” or “I’m a Mum but I’m working part time,” or “I’m a working Mum.” Just being one thing isn’t enough; women are pressured to ‘have it all’ in order to be valued by society.  The societal contrast between the 1950 and today is dramatic. 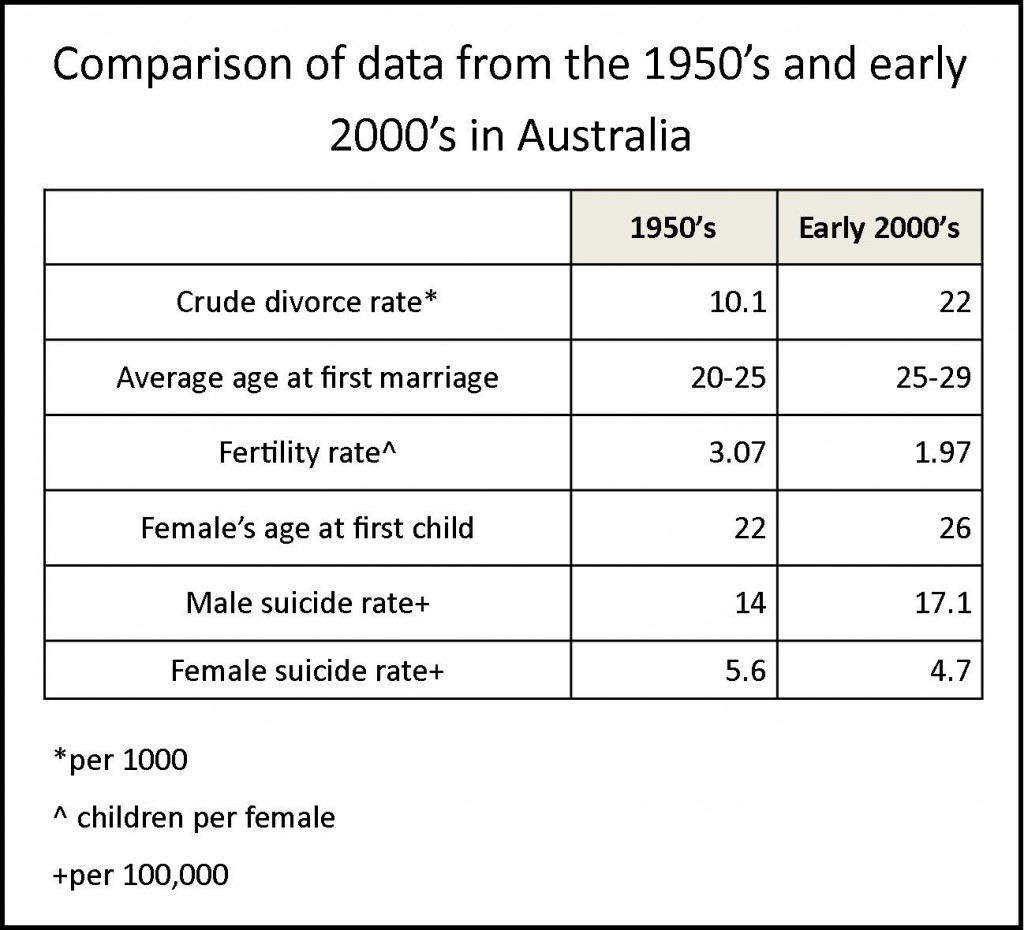 (I obtained data from the Australia Bureau of Statistics and various journal articles.)

When comparing the two time periods, it’s obvious the 1950 model of living was far kinder to society in general.  But really, I don’t think going back is realistic; I prefer to strive for an in-between. I like to call it Vintage Mother Value.  This is my goal.

This is not a post about working mother verses stay-at-home mothers or anywhere in-between. This is a post about valuing motherhood; valuing the essence of a woman: the heart of a family. If we could recapture 1950 value without losing modern choice, it would be a very wonderful thing.