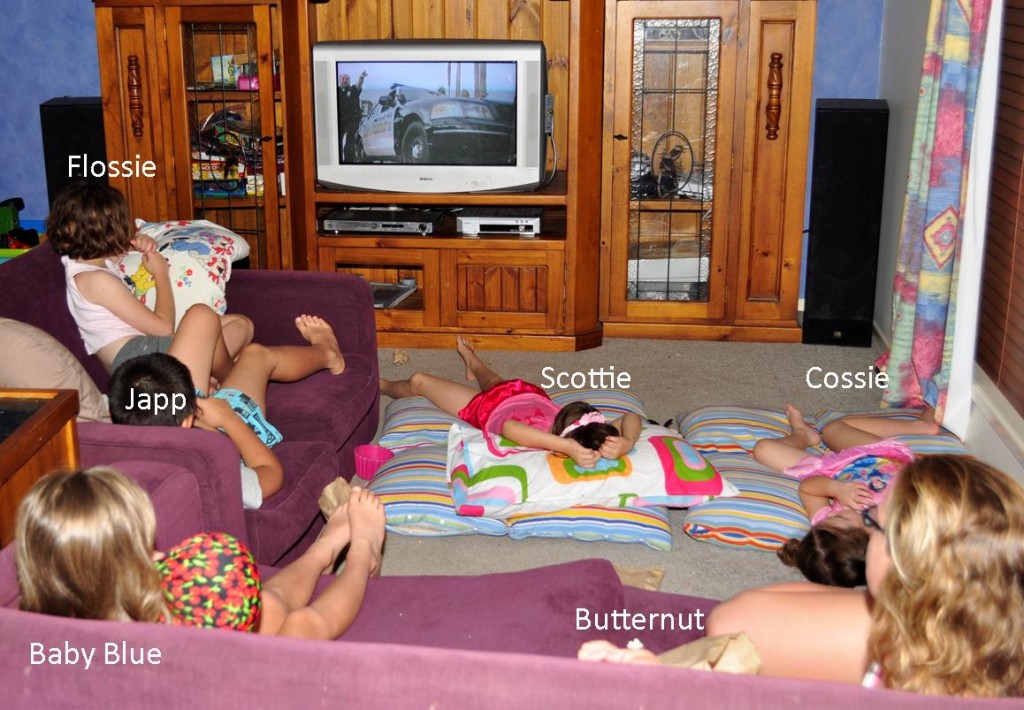 There’s a negative stigma associated around television, and for good reason.  The human mind is better at remembering images than words or numbers. This was confirmed by research done by the University of California as they trialled using images instead of numbers for a secret pin (how cool).  Our ability to recall images can be a good thing but there is also a danger, especially for young minds.

And then there’s always something buzzing around the Internet about the links between obesity and media; whether that be though advertising or inactivity.

Now, I could go on and on about journal articles, research, various philosophies and what Johnny’s Mum said; everyone has guidelines to give you. And this is just not only in the media and television department, but about every subject on parenting. Honestly, if I tried to, first read, and then implement every “recommendation” I would go crazy…crazy I tell you!

Detailed below is how television fits into our family life — relatively guilt free.

Our family and television

So here’s my take on television: the good, the bad, the ugly. 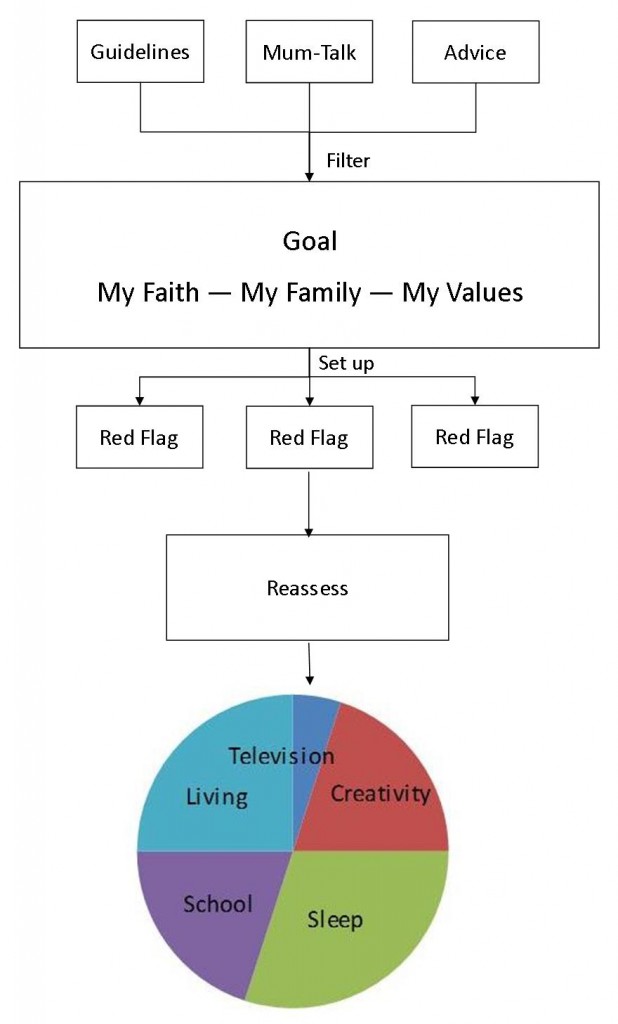 My take on television is like how I digest a lot of things: I filter guidelines (I come across), advice and mum-talk, into how it fits into my faith, my values and my family…and forget the guilt, but learn and grow instead. Here are some of the positives I can see from this way of thinking:

* Potentially children learn (through exmple) to self-regulate many areas of their life, not just television.

* Any guilt I feel is turned into something proactive.

* It’s more of a bottom up approach where the people running the family (ie. the parents) are the ones who work out what is best rather than parents rising up to a benchmark set by recommendations or guidelines.

* Rather than looking at how much television is watched on a daily basis (hours), look at how much is watched, say in a month, or in relation to other activities. 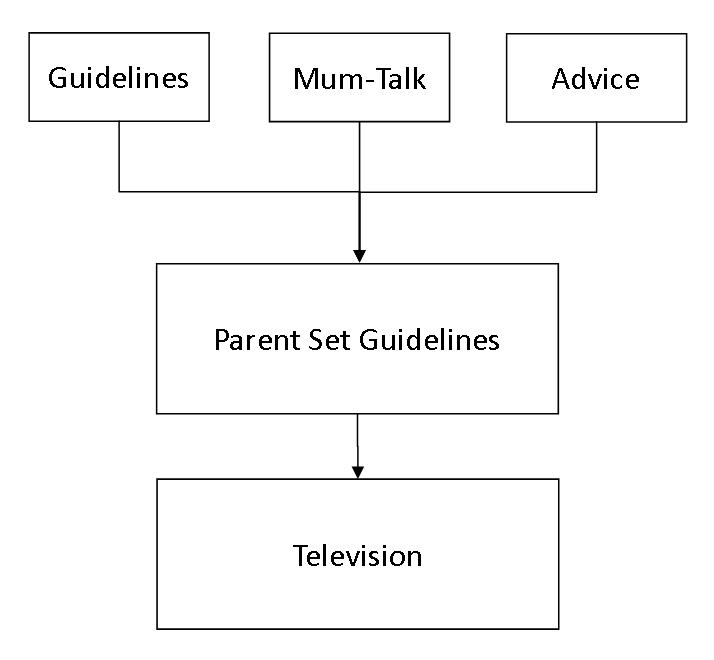 Why is following guidelines and advice bad? Well it’s not. However, here are the problems I see with this system:

* It’s too simplistic, which is unrealistic.

* In this approach, there’s no room for life variation which leads to guilt by the parent if they fail the system.

* Children potentially are not taught to moderate their own usage by setting their own red flags.

* Personally, I would go mad with worry because there is always new research available and guidelines set.  I would constantly try (to find and) stay on top of it all. Therefore, this approach would personally, be bad for me.

* Top down approach, set by people who don’t know know me or my family situation. 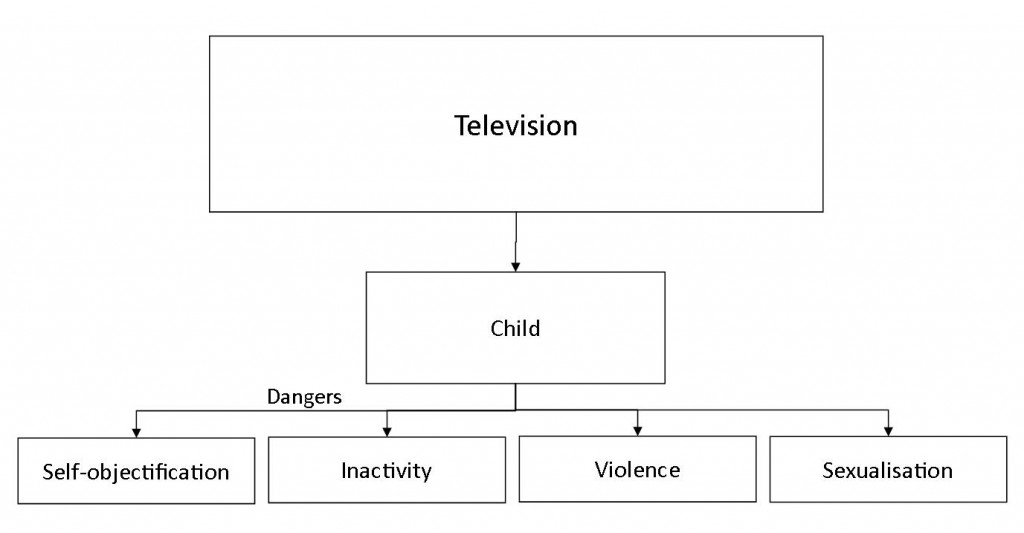 The ugly is when television is unmonitored, and children pretty much set their own usage with little, or no parental supervision.  There are huge dangers with this system including self-objectification, inactivity leading to obesity, violence and early sexualisation.

Raising responsible kids with consience who can think creatively and problem solve: that’s quite a moutful.  When it comes to television, I gauge how it fits into family life under a goal on how I aim to raise my kids. To achieve my aim, I have a red flag system to help me constantly reassess where I’m at.

Red flags can be seen as cure, rather than a preventive measure. I appreciate that, but in my experience, parenting is more about trial and error than it is about following a set system.  I believe there are too many variables for each respective family for blanket guidelines. Recommendations can be helpful but they are not designed for my family. They don’t take into account that I’ve moved 10 times in 11 years, that I have a daughter with special needs and that my husband works long hours (just for a start). The guidelines don’t know me and what I want for my family.  Instead I put red flags in my way to force myself to reassess television watching on a regular basis. Below are five red flags:

Creative thinking and imaginative play are important to me. I’d rather gauge how much television my children watch on their ability for (and time spent on) creative and imaginative play rather than a blanket guideline. So, if my kids get up in the morning and constantly ask for television, I know they are watching too much. Mostly? They get ready for school and then play the most beautiful creative games or are out on the trampoline. If I notice my children are becoming reliant on constant entertainment, I reassess our media input and foster more creative play opportunities.

What my children watch on television translates into their play. Mostly, it’s a positive thing, when the program, movie or story has become a stimulant for a variety of imaginative play ideas. However, if I feel uncomfortable about the changes in play or behaviour (if that be violent or attitude based) I will reassess what the kids are watching and perhaps, for example put some DVDs away.

There’s only 6 years between my four children but that’s quite a large developmental gap between my first and last child. I find myself allowing my almost 4-year-old to watch things earlier than I did my oldest child so I’m conscious of this. Juggling different age groups is always going to be a bit tricky but I rely on my eldest to be the ones to give if need-be. To balance this out, my eldest child has other opportunities (like staying up later).

Yes, I use the television for babysitting sometimes. I try not to make a habit out of it though.  It’s interesting, when I’m tired, I allow my children to watch more television…which shouldn’t surprise me.  If I feel myself falling into a unhelpful television-babysitter trap, I get out of the house. You can read my post about it here: Tired and Cranky Mum

I aim to teach my kids to rely more on trained common sense than rules; however establishing rules around television is a great starting point. These are our current television guidelines:

* No television in the morning on school days

* No ad watching (if a channel other than abc kids)

* If at another person’s home, and television is on, don’t be in the room (if we are visiting somewhere)

* If at another person’s home (like a relative for a sleepover), don’t watch a movie we haven’t watched before without checking with a parent

* If you see something you’re worried about or don’t understand, come and talk to Mum or Dad

* We don’t usually have time to watch tv after school but it’s not a blanket rule.

There are (and will continue to be) many, many times when I need to reassess how much (or what) my children are watching on television. Here are some ways I check this.

If the red flags are flying in my face I just say no. I say, “No television, go find something creative to do.”

This sometimes extends to media free days or weeks. My husband and I, as parents, need to be confident  to make the right call for our family (and learn from our mistakes if we don’t). If my children don’t want to find something creative to do, then I have plenty of jobs around the place to keep them occupied. 😉

It may be hard for the first few days but it’s so refreshing to have time when the television is off.  You have to be brave, but it’s well worth the effort, especially if you feel you need to get a grip on the role television plays in your family.

Fostering creativity doesn’t necessarily have to take a lot of work.  Many of the Love the Moment Challenges can be turned into hours of creative play. Being creative is about entertaining yourself and seeing beauty around you rather than the constant need to be entertained.  It’s a change of thinking, if you will.

There are days when I do have the television on extended periods. Here are some examples:

Back in January, when we were caught up in the Queensland floods and I was trying to move house, my kids watched more television than they ever had before. I didn’t like it, but it was the best I could do at the time.  While not ideal, there doesn’t seem to be any long lasting effects from that period.

If I’m sick, or the kids are sick, I usually hire a few video rentals to give us something quiet to do.

There are (many) times where I feel like I’m going crazy. This might be when the husband has been gone — like forever — on a weekend and I just need some quiet. Sometimes television can be a quiet activity that allows me to regroup myself.

This is my take on television and how it fits into our family. Yours may be different and that’s great. At the end of the day, our family is so busy doing a variety of things, we don’t have time to be addicted to television. And if I do feel our family is becoming too reliant on television, I reassess using red flags, be confident to say no and foster creative opportunities. Our family enjoys having television as part of life. But it’s just a part, and that’s how I like it.

How does television fit into your family life?

Television in Our Family Worksheet (if you’re like me, it can help to write things down so what you need to do is clear in your head. This worksheet may be helpful).

Go Jump Off a Cliff 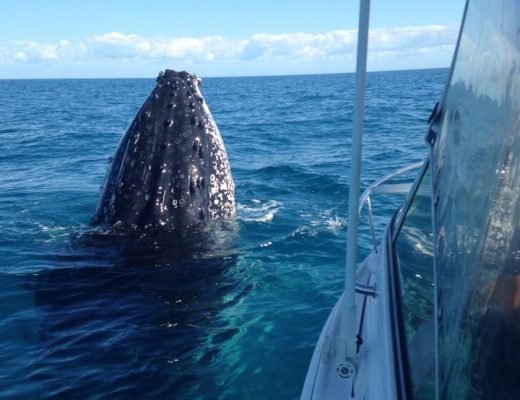 Making the Most of Special Family Experiences