This is a guest post by Danielle Holsby.  She’s done a few fabulous posts here on Be A Fun Mum before, like green pesto pasta in under 10 minutes, a Giggle and Hoot Cake tutorial, Easy Playdough Recipe and Messy Play Ideas (that aren’t that messy).  Today she’s sharing tips on setting up a mud kitchen.

Some things in life are quite simply meant to go together.

A friend of mine was talking about setting up a mud kitchen in her garden complete with muffin trays and wooden spoons and my initial reaction was of fear of mess.

I’m often prone to this fear.

Then I thought about it.

I’ve been working on my acceptance of messy play for as long as I’ve had children and I think for the most part I’m winning. I can mix the Play Dough colours now without so much as a shiver, and when I find paint all over the children, and floor, I can now laugh rather than freak out… too much.

Texta/crayons/pencil on the couch or walls still gets me where it hurts however, but I imagine nary a parent out there is down with furniture enhanced by toddler graffiti.

The more I thought about my friend’s idea, the more I realized that the mud kitchen is actually quite genius.

It’s outside, it cleans up with water, it’s nice and organic, it’s certainly dirt cheap (if you’ll pardon the pun), it entertains them for HOURS and is actually really, really cool fun.

Setting up my own dirt kitchen was really easy.  A piece of mud cake one could say.

Setting up a Mud Kitchen

During council collection I found a few old wooden crates, of which I turned a couple upside down, and then put more on their sides on top to create shelving. 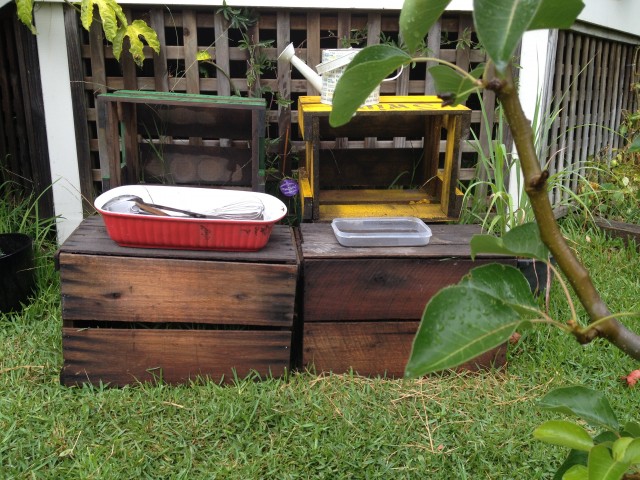 For your own mud kitchen you could use an old bookshelf, or bricks with a plank to create your kitchen bench.

A rustle around in the kitchen cupboards and drawers found an old strainer, some mixing bowls, wooden spoons and baking trays. If you don’t have any surplus stuff St Vincent De Paul has old trays and utensils for super cheap.

For dirt, I had a load of dirt down the side of the house from when I dug up my vegetable patch, but you can buy dirt from Bunnings or a garden supply store.

Just make sure it doesn’t have chemicals in it.

Just good, plain old-fashioned dirt is what you want.

This is not a dirt kitchen however. This is a mud kitchen.

To make dirt any fun at all you need to add water, so keep your kitchen close to a water supply or invest in a big old watering can that the kids can transport from the hose to the mud kitchen as needed.

Dinosaur pies require barely any at all, in fact similar to elephant poo muffins.

Naturally, each little chef will need to create their own menu and with endless mucky combinations, they really are only limited by their imagination. 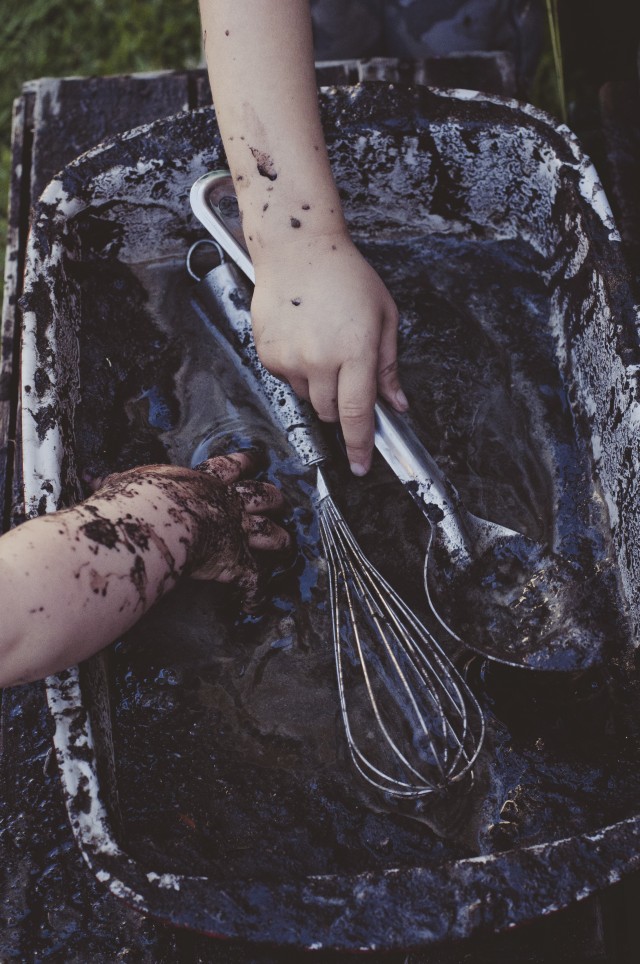 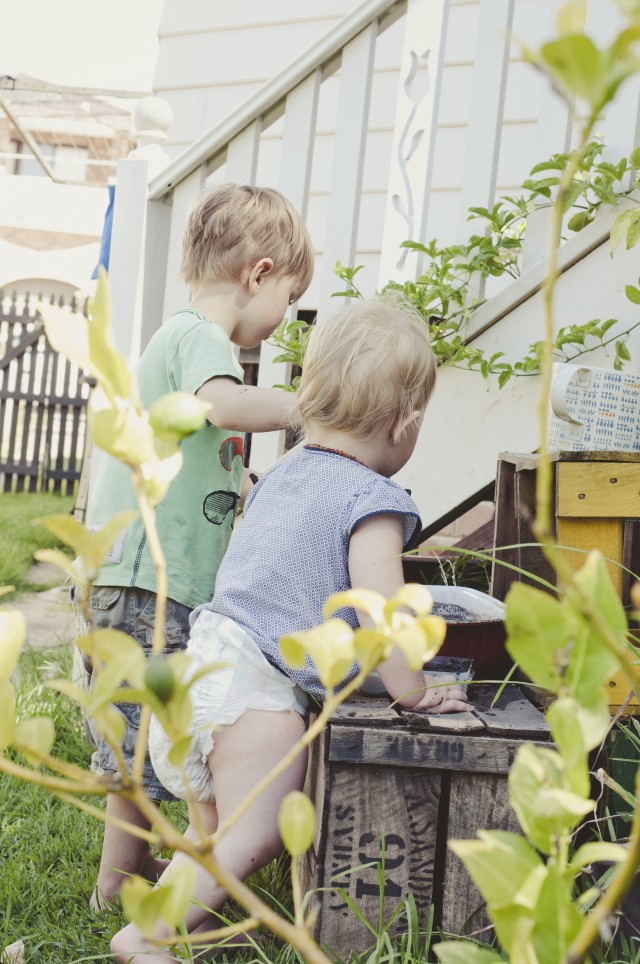 I admit that when I saw my littlest Kiki absolutely covered from head to toe I had a minor conniption, but after a shower you’d never have known a few moments ago she was the Mud Monster from the Bog of Eternal Stench. 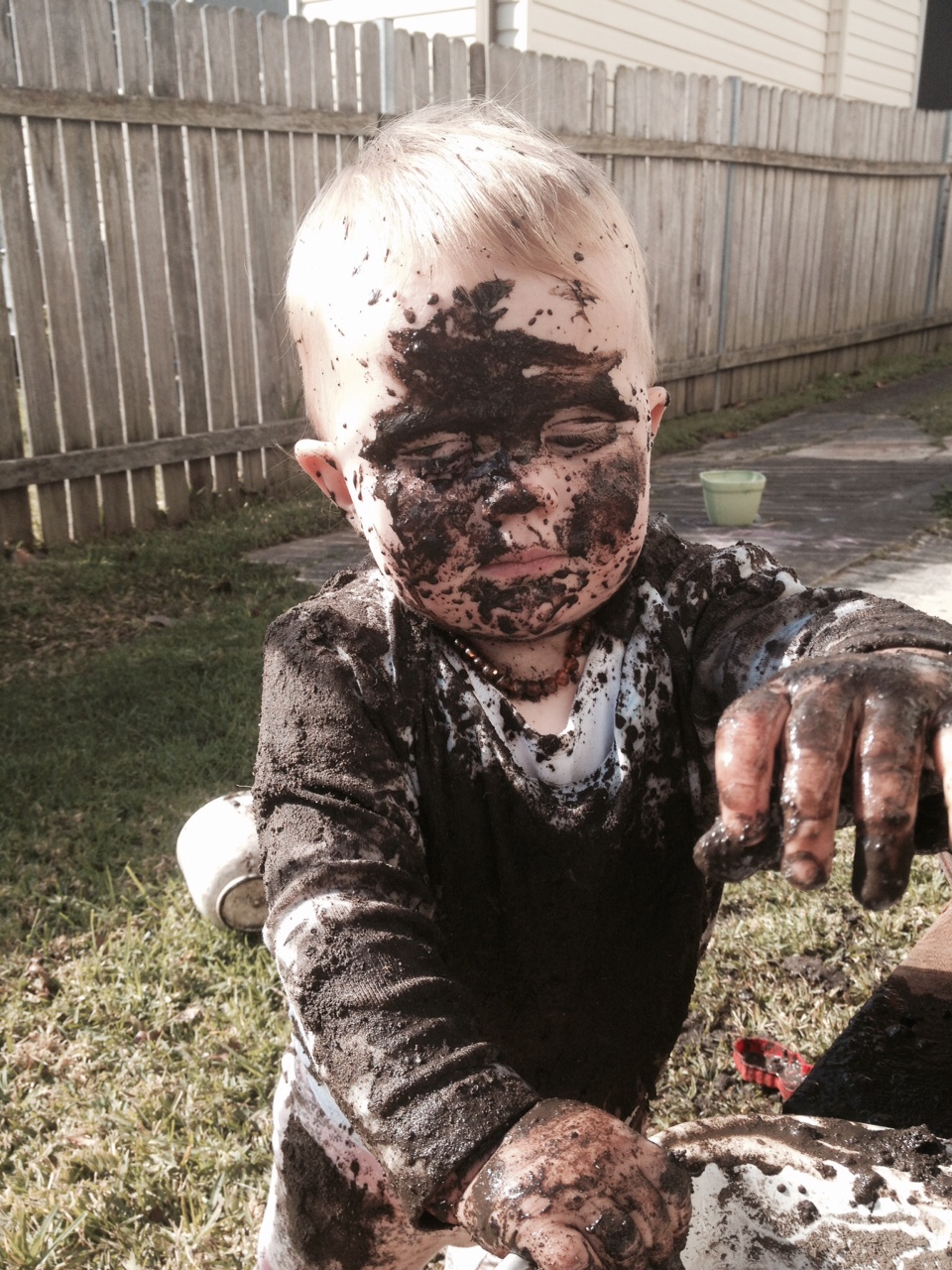 Mix Your Own Drink Fun – Inspired by Halo-Halo from Philippines 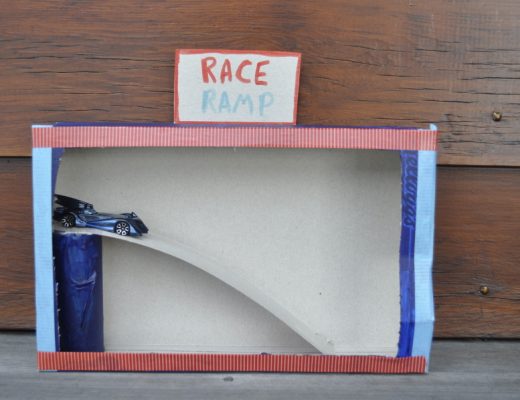 July 5, 2015
Previous Post Cabin in the Snow Scene (why this is fun...)
Next Post Christmas Scene in a Jar