Most of us like to think that our mums will be there for our graduations, wedding and to meet our children, their grandchildren. But for some women, those precious experiences are abruptly taken away by the untimely death of their mothers.

Danielle Snelling has been a motherless daughter since her mum sadly passed away from cancer in 2012, when Danielle was just 21 years old. A testament to the bond they shared, Danielle had spent the previous two years nursing her mother through the illness and was left devastated by her passing.

“Mum was my voice of reason, my grounding person, and my biggest supporter,” Danielle explains. “I knew she loved me unconditionally, and now that she’s gone, there is no one who will love me in that exact same way. That’s one of the hardest things to come to accept.”

About 12 months after her mum’s passing, Danielle found herself still struggling with grief, as those around her stopped checking in, assuming she was “over it”. Longing for support and understanding, Danielle sought grief counselling, but found herself speaking to a woman in her 50s who still had her mother in her life.

“How could she possibly understand what I was feeling and thinking?” Danielle shares. “How could she ever understand what it was like to be 23 and trying to comprehend that Mum was out of my life, never to return – never to see me graduate, get engaged, married, have children, buy a house; all those things a daughter just automatically and naturally shares with her mum. I searched for a different type of support, a support group for women without their mum, but it just didn’t exist. And I knew then that I needed to create it.”

And that’s exactly what she did. First, Danielle posted in a grief support group on Facebook to see whether anyone else from Melbourne (her hometown) had lost their mother. She even specified that the person who responded needed to have a brother, as she did, so that they could relate to one another on the same level.

That’s when she first met Eloise Baker Hughes, who was only 13 when her mother tragically died of a heart attack. And she had brothers! Soon after meeting online, the pair met in a Melbourne café, and Danielle said they were amazed at how supported they both felt, almost instantly.

“It was the most refreshing, validating and reassuring experience I have ever had”, Danielle says. “She finished my sentences, understood everything without question and just got it!

“We marvelled at the possibilities of allowing other women in the same shoes this opportunity to feel connected, supported and understood.”

From there, the idea of starting a support group emerged and Motherless Daughters Australia (MDA) was born.

The pair admit they had little idea where to start and no prior experience in the not-for-profit sector. Eloise worked in pharmacy and Danielle was a primary school teacher, but their passion drove them on.

In its infancy, MDA was a two-woman band. In 2014 they registered a bank account for fundraising purposes, and then they set their sights on registering as a not-for-profit organisation.

“We got a board of directors together (I had no idea what this was at the time!), including a Chair (What is that? Something you sit on?!). We met at one of the director’s houses on a regular basis to plan a way forward, before we were formally registered in 2018.”

Now, Danielle is employed by the organisation, and a team of volunteers assists her to connect with their community of more than 5000 women. MDA aims to represent, inform and connect women and girls whose mums have died. This is achieved through a range of support services including an online support group, fact sheets, social media interaction, an annual pre-Mother’s Day high tea, Memories of Mum journals for children, and many other initiatives.

In 2020, Danielle says there were 3.7 million women and girls whose mums had died. Of those, 1.2 million had experienced the loss of their mum before they turned 44, strongly indicating that their mum had died before or during life’s key milestones.

Maddie is one of these girls and has been a part of MDA for almost two years. She was just 15 when her mum, Julie, died from bowel cancer. After her mum passed away, Maddie was diagnosed with Functional Neurological Disorder (FND), a condition that has left her unable to walk and talk at times. She also received a diagnosis of depression and Post Traumatic Stress Disorder (PTSD). All three diagnoses have been attributed to the impact of mother loss.

“Maddie is a phenomenal young woman,” Danielle says. “She is not afraid to ask for help and completely and proudly owns her battles with her mental and physical health, which is so important and inspiring given the movement to end mental stigma.”

Throughout the past year, Maddie was stuck at home doing Year 11 via remote learning and endured a relapse of her FND condition. Her work was piling up and she bravely reached out in the MDA support group to share her struggles and challenges, and to ask for help. Danielle says that a number of older women responded with heart-warming support.

“One of the members shared that sometimes it’s nice to have someone sit by you or with you while you’re working, just for comfort and company and asked if Maddie may find that useful. She agreed, and so a particular member arranged a roster of women to log on to zoom for one hour at different times throughout the day, to sit with Maddie while she studied. I was included in the study session roster, and it felt so nice to offer simple, but tangible support to someone in their time of need.”

In Maddie’s words, “MDA has helped me to build connections with other motherless daughters who have helped me process my grief and support me through the ups and downs of young adulthood. I have gained so much support through the women in the support group and organisation more broadly. It’s the type of support I am unable to get through family and school friends. I don’t know where I would be without MDA.”

Almost 10 years after the passing of her own mother, Danielle says she is still surprised by society’s lack of emotional intelligence and discomfort around anything death or grief related.

“I underestimated the magnitude of work that needs to be undertaken in an educational capacity to improve the problem. We hear the same stories over and over about how friends, extended family, colleagues, partners, etc, are just not up for discussing a dead person which often leaves the griever feeling like they’re a burden or needy. People are far more concerned with trying to fix, rather than holding space, listening or asking the person about their mum.”

But she says that the flip side has been meeting lifelong friends that have become more like family.

“I’ve been able to connect with some truly fantastic women who are now my nearest and dearest. We are like a little family at times, and often play the role a mum would play. We care about each other’s achievements, we check in if one of us is sick, we deliver chicken noodle soup and we are always there for one another without fail when the chips are down. We try do to ‘mum things’ for each other and it comes so naturally.”

Motherless Daughters Australia (MDA) helps women and girls navigate the everyday and life’s key milestones without the support of their mum. MDA is also dedicated to advocating on behalf of the MDA community to the wider community, educating them on the impact of mother loss and how to best support someone who has lost their mum. 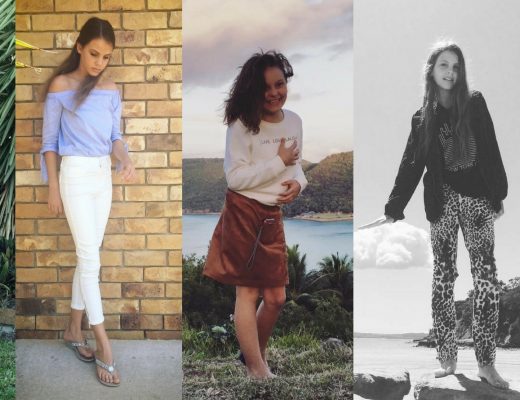 Where to Buy Nice Clothes for Tween/Teen Girls